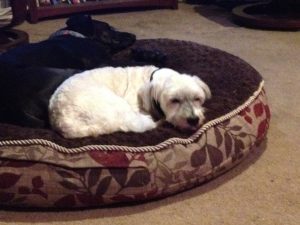 Finn is a Havanese rescued from an Ohio puppy mill just before Christmas 2014.  I don’t know exactly how old he is, or how long he had been kept at the puppy mill, but I do know the results: physically, he was missing 5 teeth, including all four upper front teeth–from bad dental care?  Poor nutrition?? Gnawing on the bars of his cage??  We’ll never know.  His coat was so matted that he had to be shaved down to the skin and he had an ear infection. Mentally and socially, he had to learn the most basic tasks: to drink from a bowl instead of a bottle hanging on the wall of his crate, to walk up and down stairs, and how to handle open space. For weeks, he ran in circles in the living room of his foster home, smaller circles gradually widening to complete circuits of the living room, and always clockwise.  On walks, he would take a few steps, spin clockwise and take a few more steps. People on the street saw this as an adorable little quirk, not realizing it was neurotic behavior born out of years of confinement. Most heartbreaking of all, he cringed at the slightest human touch. It was months before he would seek out physical attention. The first time he put his paw on my hand when I stopped petting him was almost too much. In fact, the smallest, most common canine behaviors are huge steps for him. Instead of being upset when he shreds some paper on the floor or unzips purses or luggage looking for treats, I almost have to congratulate him for becoming a dog. He now regularly seeks attention  from people he meets. In fact, for a dog who didn’t know what to do with cheese or hot dogs, he has become very skilled at charming people for treats–just ask the neighborhood doormen!

He has made such tremendous progress over the past year-he loves his brother Wesley, a fellow rescue dog (follows him everywhere), goes to doggy daycare and loves road trips, boat rides and running through the grass.