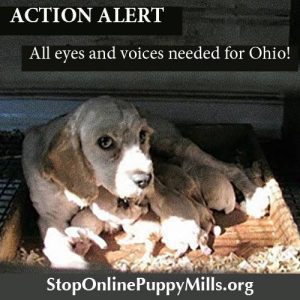 All eyes and voices needed in Ohio. Does not matter where you live. The dogs need us! The pet industry is working at the state level to undue bans that cities have enacted to stop the sale of puppies in pet stores. It has already disgracefully happened in Arizona and Ohio could be next.

Please contact the below Ohio Senate committee members and ask them not to support Senate Bill 331.

All you have to do is copy and paste this letter.

“As a voter and taxpayer, I firmly believe SB 331 is insufficient to adequately protect consumers or the puppies sold in pet stores whose parents live in breeding conditions where “profit above care” for the facility owner serves as their primary motive for existence. I respectfully request that you do not allow this “fast-tracked” bill initiated by special interest groups to circumvent the will of voters who overwhelmingly support pet stores like Mutts & Co. and Pet Valu who make an enduring commitment to end the “puppy mill to pet store” supply chain in their business operations.”