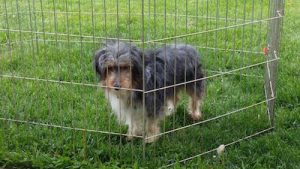 Blossom was rescued by Cause For Paws (CFP) in Illinois. We’re not sure exactly what she is, but her father (who also got rescued by CFP) is a Sheltie and her mom may be a Yorkie. I got Blossom as a foster on May 16, 2016 and I had a feeling she would not be a foster for long……I would keep her. The wonderful people of CFP had given her a bath, but she still was very stinky from being in a cage full of her own poop and pee. After I got her groomed, she looked like a different dog, and no more smell! She was healthy physically, but not so much mentally. CFP was told that the dogs at the puppy mill had never felt the touch of a human – they were moved around with catch-poles. Everything frightened Blossom, even a small quick movement, or a raised voice. It was like she had PTSD. For several weeks, she had to be on a 30 foot leash so that we could catch her in the fenced-in yard and bring her inside because she would just run circles and couldn’t be caught. Even indoors, she would run away, and if she did stop and let me come up to her, she would pee because she was so scared. In September 2016, I got Blossom’s younger sister, Cara, as a “foster” – knowing full well that I 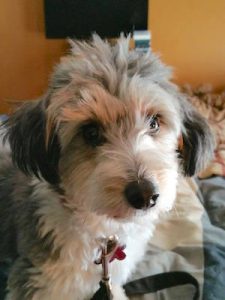 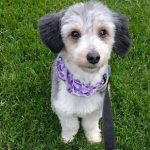 Also, in order to help her confidence and to socialize her more, I’ve been taking her to obedience school, and now we are in the CGC (Canine Good Citizenship) class! She is still afraid of a lot of things, especially loud noises, but the progress she had made is amazing and I just love her to pieces!
Category: Dog Rescue StoriesMay 25, 2016
Share this post
Share on FacebookShare on Facebook TweetShare on Twitter Pin itShare on Pinterest Share on LinkedInShare on LinkedIn