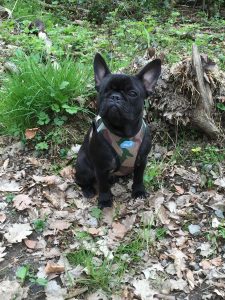 I was born in Hungary in a  puppy mill. I was miserable from the first moment I set foot on earth. The first time I tried to open my eyes, I felt that there was something wrong with one eye, but I didn’t know what it was. All I wanted was to be with my mom and to get some milk.
Time and again, a human would come, would poke me with his finger or lift me to look at me. His voice sounded hard in my little ears and one day I heard him say that I’m useless thanks to my bad eye, that nobody would ever buy me and that it there is no point in feeding me any longer.
He grabbed me and placed me in a dark box. I was scared and cried for my mummy.
Strange noises, strange voices…and the box was opened.
I remember bright light, the smell of a new home and a voice that was warm and comforting. I was hungry and looked for my mom. A strange nipple was put into my mouth and it didn’t taste like my mummy’s milk. But it was okay. I didn’t have to fight with my brothers and sisters for my meal and for the first time I was really full…but where was I?
I could hear the voices of many many other dogs. Some of them sounded scared. Others excited or angry. I looked around and what I saw wasn’t luxurious, but it was warm and friendly. Everybody talked to me in such a nice way, I always had enough to eat and when I was freezing, somebody held me warm.
But I was still missing my mummy. Would she miss me, too? How was she doing. I wanted her to be with me…far away from that human with the hard voice and hard hands.
One day one of my new friends took me to a man who was called veterinary. He made me sleep and when I woke up again, my eye didn’t hurt any longer. I was so happy and I thought life couldn’t be better.
But some days later I was taken again away from my new friends, put into an iron vehicle in a cage, next to other cages with other dogs.
What was going to happen to me now? Didn’t my friends like me any longer? I was scared again.
We were driving for hours and hours.
Suddenly the vehicle stopped, the door opened and our friendly driver took me carefully out of my cage. He placed me into warm and soft hands that belonged to a human with a reassuring voice. She wrapped me into a good smelling cuddly blanket. I could feel that it was a human mummy. She held me tight and I could listen to her heart beating, in a rhythm that seemed to say: at home…at home…you’re at home…
My name is Odin and my story started on 17th December 2014. Today I’m a big guy and I understand everything much better. I understand that my breeder is a bad bad human!
He luckily gave me to a shelter and from there I was rescued from the German organization “Plattnasenhilfe e.V.”
Help me to let EVERYBODY know what’s going on in that kind of puppy mills. That the little mummies are just birth machines for their breeders, that they spend their whole life in small dirty cages. Right enough to eat that they cannot die.
Never petted, never getting any treatment, no doctor when they are ill, just to give birth to babies that are taken away from them much to early.
Many of these breeders make the abdominal cut theirselves and stitch it up after.
Those puppies are all! more or less sick, having parasites, diseases like  canine parvovirosis or leishmaniasis and often hidden genetic diseases.
Whenever you read or hear a story or a report about illegal breeders or puppy mills, you should share it.
Our common goal should be to inform as much people as possible about the horrible conditions at puppy mills, in hope that the day will come that nobody else can say “I didn’t know about that”
https://www.facebook.com/Odin-der-Frenchie-771454122942409/
Category: Dog Rescue StoriesMay 17, 2016
Tags: French Bulldogspuppy mills
Share this post
Share on FacebookShare on Facebook TweetShare on Twitter Pin itShare on Pinterest Share on LinkedInShare on LinkedIn