This page is an example of how one online puppy mill used photos and their website to mislead consumers. The pictures below are of a breeder’s facility that was previously USDA licensed. But because of the ease of selling puppies online they dropped their USDA license and are now considered an unlicensed breeder. The photos below are deceiving because it shows a large green farm yet the breeding dogs were suffering from no vet care, were forced to live and breed with painful and life threatening conditions, and suffered from mental anguish. Below is the story about the undercover rescue of four of this breeder’s breeding dogs. 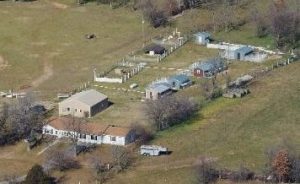 Excerpts from their website home page:
“We live on 100 acre farm in Missouri.
We love our dogs and want to find good homes for their Babies.

All of our puppies for sale are registered through American
Canine Association. We Guarantee our puppies for 1 year for
genetic problems and they are all current on vaccinations &
de-wormed

We offer shipping for your new puppy for an
additional charge of $250-$320 by airlines . We prefer to use
American Airlines Cargo, however, we also use United for our
Frenchies. Our normal days for shipping our puppies are
Fridays. We can ship other days if it will work better for you.

We hope to help you find the perfect puppy for you & your
family!”

Reality for the breeding dogs. 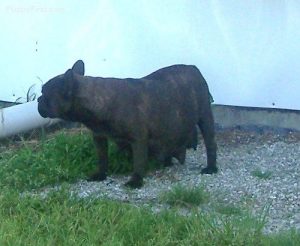 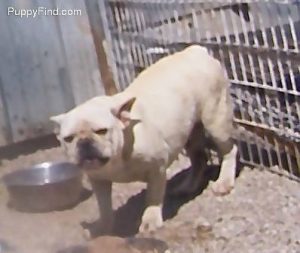 The truth about this breeder and the dogs they claim to love.
They breed three different kinds of dogs and show around 30 adult breeding dogs on their website. They sell French Bulldogs puppies online. An undercover rescue of four of the breeding dogs this breeder claims to “love” easily disproved their claims of great care. Two were being advertised for sale by the breeder via Puppyfind.com. Once the rescuer was at the facility, she was able to convince the breeder to sell her two additional breeding dogs. 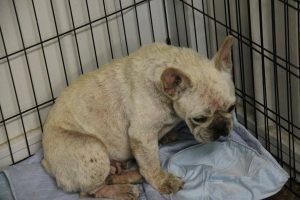 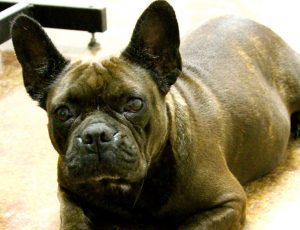 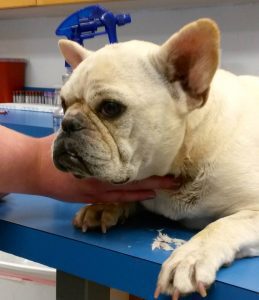 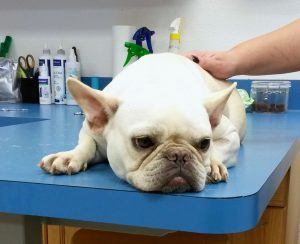 All four dogs were afraid of human touch and would pancake flat to the ground or stiffen when a human picked them up. They were shut down emotionally, would avoid eye contact with humans and each had severe medical issues from not receiving vet care.

Even though these dogs were sick and had congenital issues, the breeder was breeding them to produce puppies. These puppies were then being sold sight unseen online to unsuspecting families across the United States. 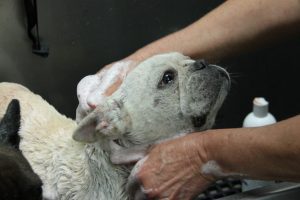 Jude getting a medicated bath.

After the rescuer visited the facility in person, it was clear how deceptive the breeder’s website ad is. The website talks about 100 acres of land, implying the dogs have use of it for exercise and play. The fact is, this breeder uses small barn like buildings to house their dogs. These small building are where they spend their entire lives. The dogs never feel the 100 acres of land under their feet, instead their paws rest on wire bottomed cages. The four rescued breeding dogs in this true story had been denied vet care for years and all four were living and breeding with painful medical conditions. A far cry from the loving home portrayed on the website. Unfortunately, this is the norm not the exception. The internet is full of deceptive puppy mills. The only way to insure you are not supporting the cruel puppy mill industry is by doing your homework. If the breeder does not want to show you where your potential puppy lives, and does not let you meet the mother dog, chances are… you’re dealing with a puppy mill.

Fortunately, all four dogs in this true story were vetted and rehabilitated.  They have all been adopted into loving homes where they are now treated like queens!