Don’t be fooled by beautiful pictures and websites.

Below is the advertisement I fell for. The second photo is of my dog arriving to me via a PetEx truck. She had already spent 9 hours in a truck from the breeder in Illinois to the Pet Ex distribution center in Missouri. After spending 4 days in the distribution center, she was again put on a truck for over a day, making stops along the way from Missouri to Florida. She was sick upon arrival. Not the happy puppy I was promised. 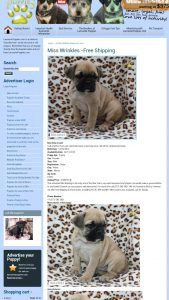 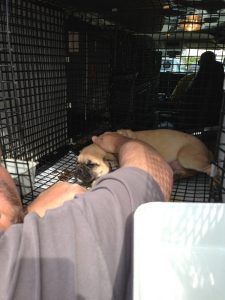 This is the father of my dog. Look at his feet. He lives in a kennel and is used for breeding. That’s it. The mother died during birth but here is a photo of one of his female pugs that could have been my dogs mom as this photo was taken when her mother was alive. 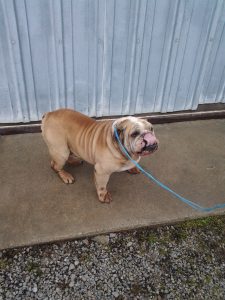 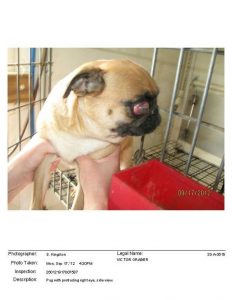 To Whom this May Concern,

I live in West Palm Beach, Florida I was online searching for a puppy breeder and I came across a site called Lancasterpuppies.com they had countless number of dogs and it stated from USDA approved breeders. I was hesitant to buy but I thought it is a USDA approved so they must be responsible to have a license. I came across “Miss Wrinkles” my half pug half English Bulldog. She was beautiful healthy and looked like a good dog. The AD said she was up to date on shots healthy and playful and to contact this number which was Mr. Victor Graber of Sullivan, IL.

I called him two days in a row before purchasing her asking several questions he had perfect answers for everything. He told me she up to date on shots that he owned both parents. That he had been breeding for years. He gave us his license number which we searched and was legit. He said she is happy healthy and adorable puppy. We asked for more pictures he sent more so we went on to purchasing her. He said “another woman wants to buy her so I want to sell it to you first so you have to hurry and purchase if you want her”. Falling in love with her pictures and breed(s) we went ahead and bought her for $850.00. He explained that she would ship via PetEx. He said she would leave him Thursday and arrive to us straight from him. He took her to an Animal Healthcare Center to get her health certificate for travel.

A nurse there I had called unable to talk to the doctor told me she did come in as well as countless other puppies he was shipping. She said that they don’t go into depth with health they look at their heart/lungs teeth and skin. I asked her if the puppy was healthy and had any testing and she said no but as far as by quickly checking her she seemed healthy minus an under bite. I felt suspicious but I had trusted the breeder because he said she was healthy and he was “USDA” approved. Once she was paid for he wasn’t as quick to answer my phone calls or emails. He also neglected to send parents pictures which the mom was later said to have a C-section which she and the whole litter minus my dog “Miss Wrinkles” died (awful). Mr. Graber lied about shipping her to me.

She ended up on a long 9 hr truck drive to Missouri with other possible sick pets. Then she sat in a cage at PetEx’s distribution center with hundreds of other dogs from Friday to Monday night until they shipped her again by truck from Missouri to Florida. I would never have allowed this so I felt so hurt Mr. Graber would put his puppy through this or any animal. She was on transit from Monday to Wednesday. When we finally got her we took her straight to a vet because I knew she was sick. She was crying and diarrhea with blood. After countless vet trips and missed work (had to call in and couldn’t work hours my boss needed me to because of her being sick). I felt heart-broken, overwhelmed, disappointed, and extremely upset. I spent my whole day I called off of work calling USDA and other agencies in hopes to help my sick dog (Mr. Graber did not want to accept responsibility even though I sent him vet visits and pictures of her bloody diarrhea and green discharge from her nose). He didn’t even check on her!

She was nothing to him….there was no one who could help me. I lost a lot of money between her cost, the special bland food I bought and throwing away items because of fleas, vet bills, missed worked, not to mention the most important part a dog in severe pain and distress because there are no laws or anyone to protect her. On top of that I felt myself depressed anxious and overwhelmed.

I began feeling sick myself Sunday because of all the horrible events that happened. This needs to stop…I am so sad and so heart-sick by the fact no one wants to take responsibility for these animal cruelty crimes which people are sending sick dogs and lying to consumers. I don’t want anyone to have to go through what I am STILL going through (she’s not better still). Please don’t buy a dog thru the internet and never buy a puppy from a picture. If you can’t meet the mother dog, don’t buy the puppy.

PS I later learned that PetEx and Mid America Pet are at the same location. Mid America Pet is a large-scale puppy dealer licensed with the USDA as a Dealer, no wonder they have a transport system that services the entire country.