How Dog By Dog Became A Reality – by Chris Ksoll 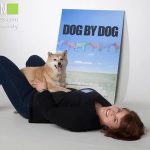 Every person who owns a dog knows they change your life. The first rescue dog I adopted and still have, certainly changed my life in ways I never could have imagined. He is amazing. He has made me a better person. To keep him company, I adopted a baby dog for him. Louie is such a nurturing dog, I wanted him to take care of a puppy. When I met the puppy, I was told by the foster, that “No one can touch him and he lives under my couch because he is so afraid”. He was from a puppy mill. Of course I had to adopt him—this was a special needs situation and Louie immediately wanted to take care of him. Brady wouldn’t let me touch him for a month. Louie literally took care of him for that month; nudged him to the water bowl; shared food, toys and treats; nudged him to go outside and potty. Brady was terrified of everything and everyone. But he was my baby and Louie’s baby. The rescue did not talk about the mill and I did not really ask at that time but it bothered me. Then, the rescue called and said they had an emergency situation and needed help moving a “breeder girl” to a new foster. Did not know what fostering was and did not know what a breeder girl was. Also did not know that she would change my life an inspire me to make the Dog By Dog Documentary.
Kumiko was in a chicken wire cage for 9 years. Breeding every cycle and babies ripped away too soon; no medicine; no love; no solid flooring; no medicine during breeding and after delivering; no annual vet checkups; no human touch.

So when I met her, she had a urinary tract infection, worms, bad fur and none on her tail. Most of her teeth are missing. She was clearly walking in pain from the UTI and her female organs were all hanging out. I could not believe what I was seeing. “Operation Heal Kumiko and Find The Truth” began.

As I was getting Kumiko healthy, I promised her it was adoption and forever and not fostering. But I have been fostering many mill dogs since. Each one has taught me something important in understanding the mills. Knowing this could legally be done to a dog shook me to my core. I had to find out WHY mills exist. Surely, no one thinks this is ok. But why is it allowed? As a 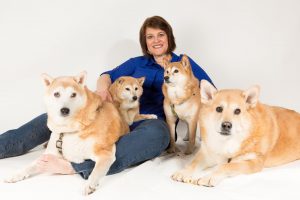 banker in my day job, I follow money trails, to help people. It occurred to me after much brainstorming, contemplation and research, that no one really knew the money trail that allowed the mills to exist. I watched and read everything that exists. Then I started to wonder about the magnitude and power of who is allowing this to exist. I had to figure out a way to find the truth and deliver it in a way that no one could stop. Thus, the Dog By Dog Documentary format; to uncover facts, tell the truth and be able to deliver it to everyone.

But who should I have as a partner? This would become the most important and best decision on my life. Chris Grimes was/is a small firm called 5414 Productions. That meant he could be nimble and he owned the company. No bureaucracy. He had no connection to animal-anything. That meant this would truly be objective. We could not be tagged an animal propaganda piece. I watched his award winning documentary “A Second Knock At The Door” and it was about friendly fire. Veterans are another passion of mine and the film was outstanding. Objective, fact based, even toned, excellent and so well done. That is what I wanted. And of course, at first he was not interested in making a “fuzzy animal” film. But then he started researching and loved the money trail idea. There was nothing “fuzzy” about this topic.

A partnership and The Journey for Change was born. It has been the most amazing and most important partnership of my life. I really believe Chris Grimes is a genius at his craft and I am so grateful he is the one who made this film. Everything I know about animal welfare matched up to his genius. I am grateful to his whole team.
It took me a year to figure what I wanted to do and how, It took five years to make. On January 31, 2017, we had distribution via video on demand and streaming in the USA, Canada and UK! DVD and Blu Ray begin Feb 28, 2017 but we are doing Amazon pre-orders through www.dogbydogdocumentary.com

What do I want to see happen now? I want everyone to see the film because they will see that Fortune 100/500 companies are paying money to fund PAC’s whose sole purpose is to block help for mill dogs. You don’t see that in their commercials. I want people to know the truth about the Amish, the AKC and the USDA. We want the Blackfish effect for the mill dogs. I want people to buy products that don’t sponsor cruelty. And what policy change do I want to see happen next?: 1) A rewrite of the Animal Welfare Act 2) Move Companion Animals out of the Agriculture subcommittee for any legislation, where it all gets defeated (puppy mill legislation) and 3) Move Companion Animals to the Commerce Dept and out of the USDA clutches. The USDA is beholden to large commercial Ag and they will never help the mill dogs.

Thank you to everyone who has been supporting us and the film!! We are so grateful and armed with the truth, together we can now make change the dogs need. I have kept my promise to Kumiko, Louie, Brady, Cagnie, Josie (RIP sweet girl) and all the fosters.

Why We Question American Humane’s Collaboration with Puppy Spot
May 24, 2021