Ollie is Mr Sweet and was lucky to have fate intervene in his life. His pregnant mother was rescued from a mill and he escaped becoming a puppy mill puppy. Instead of being shipped off to a pet store at 7 weeks, he was safely born into a home and got to know only the love of humans. He is a smart, happy, well adjusted boy. He is in love with his girl friend Pippa.

Clyde’s life was destined to be something that no one could wish on any dog…. a puppy mill stud. He spent the first four months of his life alone in a cage. At four months old, he was taken to auction in Missouri to be sold to the highest bidder for a life of breeding. Fortunately, rescue was attending the auction and saved him from that horrible fate. Clyde is now 3 and is very well adjusted but he does not like to be alone. Whether he is awake or asleep, Clyde is always next to his humans or the other dogs. Clyde’s life now is nothing but play and hanging out with his family, where he is the life of the party. It makes us shudder to think that this guy could be living in a cage in a mill without love or soft human touch. It also makes us fight harder to save the others. 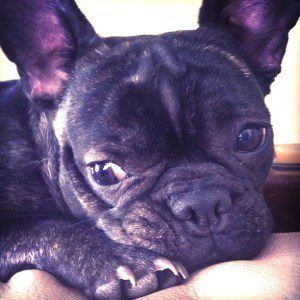