Did You Meet The Mother Dog? 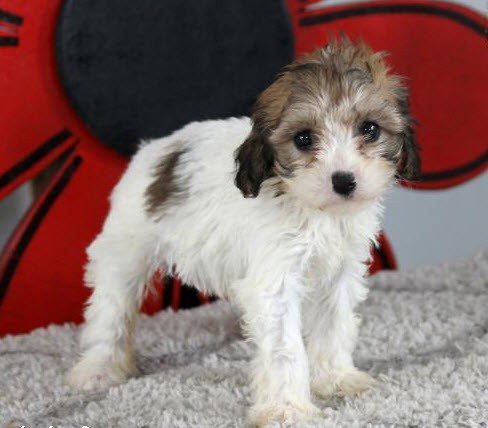 While I was out running this week, I saw a man walking a puppy, he was coming towards me. I knew right away the dog was most likely from a mill. It was the cutest thing you have ever seen and I had to stop for both reasons. The puppy was “party” colored, fluffy, spunky and adorable.

I halted my run once they were next to me. I wanted to see this cute boy face to face and I also wanted to know what it was and where the puppy came from. I ended up knowing the man. He and his wife have had several dogs over the past 25 years and are great dog owners. I started to gently ask my questions. He told me his pup was a Mini Poodle mixed with a Bernese Mountain Dog.

This mix of dogs seems to be very popular these days and many of the Amish mill “breeders” are jumping on the bandwagon. I asked if he got the dog from an Amish breeder in Southern Illinois? He said they found him online in Northeast Iowa. Since there are 235+  known puppy mills in Iowa, my radar went off. I asked if he went to the breeder’s house and if so, did he meet the mother dog?  Did he see her condition and where she lived? He replied that he did go to the breeder’s house and the mother and father were on the property, but he did not see them.

I asked if they had dogs in out buildings around where he was viewing the puppies and he said yes. I said “you drove 500 miles, but you never saw the mom?”  He said yes, she and the father were on site, but we they were not concerned with them. Let me say that again…. they were not concerned about them. He explained they drove there to meet and pick out their puppy in person. He said the breeder offered to ship the puppy to them, but they wanted to meet the puppies and pick for themselves, so they got a dog with the temperament they wanted.

I could not leave him without saying in a very nice way, that Iowa currently has around 235 known puppy mills and meeting the mother and seeing how and where she lives is really important. I said no one wants to support cruelty.

We said goodbye and I started back on my run contemplating the fact that this is the society we live in today. People are buying everything online including live puppies with no regard for the mother and father dogs, their ages, their condition, their health, how they are treated, how they live, where they live. They are not even thought about. Puppies are the product of the parents they come from.

Dogs are becoming a disposable commodity. There is a complete disconnect from loving the puppy and caring about the conditions in which it was born. We live in a world where anything can be rationalized. Puppy mills, the factory farming of man’s best friend, are just one of the symptoms. How can you love your own dog beyond belief, treat it like a king, spoil it and love it like a baby and not care about that same puppy’s mom or dad?

Thinking About A New Puppy
September 7, 2019
Video: We The Puppies
Recent Articles
Go to Top